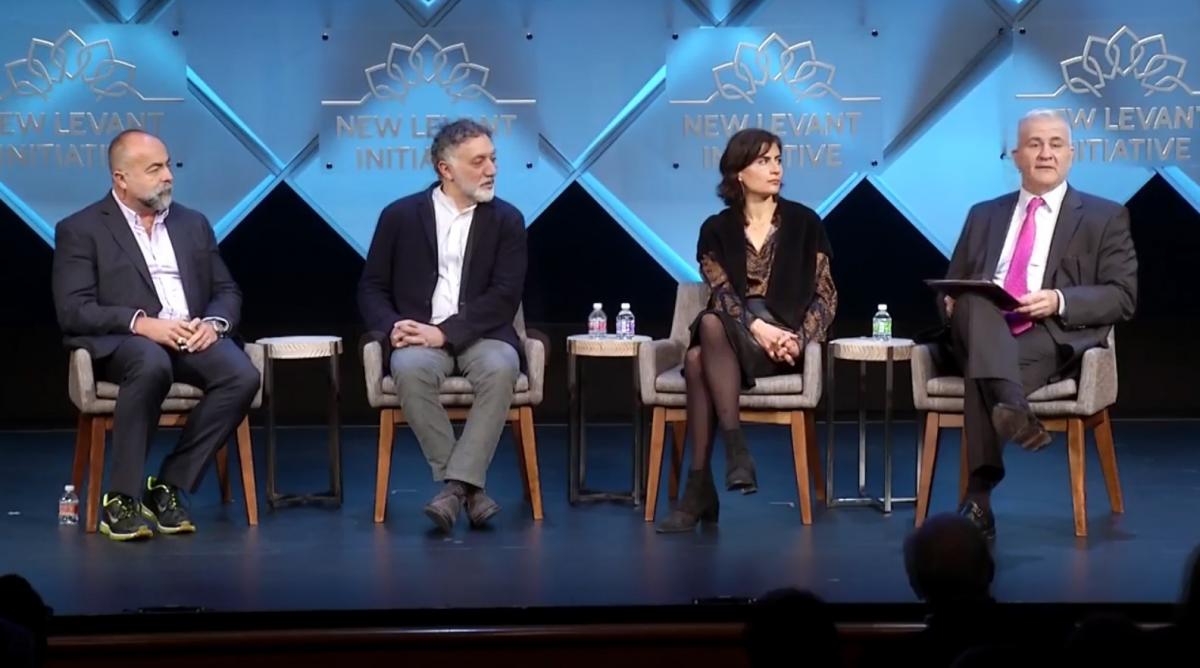 Back in 2015, Amale Andraos, Dean of Columbia University’s Graduate School of Architecture, Planning and Preservation, Hashim Sarkis, Dean of MIT’s School of Architecture + Planning, and Rodolphe el-Khoury, Dean of the University of Miami’s School of Architecture, and Farès el-Dahdah, Director of Rice University’s Humanities Research Center met to discuss how, as a group, they were in an unprecedented position to engage in academic activities that could benefit from their shared Levantine origin. Since then, Dean Andraos hosted a conference on the Arab City, Rice hosted three symposia on the Arab Nahda, Dean Sarkis has been undertaking research on larger regional formations in the Levant area, and Dean el-Khoury has invited young architects from the middle east to lecture at Miami. When they met again at the New Levant Initiative Conference, it became clear that a concerted effort among them can begin to take shape in the form of parallel Levant related initiatives at their respective institutions. Each initiative would be an opportunity to reflect on the near east, not as a war-torn region of the world but as a trope, or an idea, that ought to take advantage of a successful formula it once employed and that enabled “nearly four hundred years of peace and prosperity.”1 The hope, simply put, is to imagine a new Levant that consists not of nation states but of what was once a network of related, yet diverse, cities, the lingua franca of which was French and their context Ottoman. Together, all four deans and director can begin a nationally relevant conversation on the role that architecture, urbanism, and culture will play in the construction of this new Levant, while cautiously keeping in mind that the buildings we live in are all too often co-opted by unintended or unwanted politics. If the Levant, however, was ever a successfully modern enterprise it was precisely because it was not nationalist and because it made little effort to brand itself consistently across its territory. What made Levantine cities modern is their very diversity along with a taste for mid-19th century urban interventions that necessarily involved representative forms of municipal organization keen on investing in the public sphere. This included new boulevards, corniches, race-tracks, public gardens, museums, infrastructural services, cafés, etc., to which one might add red light districts and the olfactory background of orange blossoms and Arabian jasmine. Granted, a shared ambition to promote the vibrant history of Levantine coexistence may not be all that easy to pursue at a moment “when Iraq continues to be stricken with vicious rounds of sectarian violence, when Syria is going through a debilitating civil war, and when Lebanon seems perpetually to be on the brink of sectarian implosion.”2 It remains nonetheless evident that the Levant did cultivate a modern idea of coexistence, be it Pan-Arabist or Near Eastern, and that it not only can be seen as having once fostered a resistance movement (against an Ottoman imperial regime riddled with discrimination) but can, once again, become a resistance movement against divisive politics. Cities like Homs, Aleppo, Mosul, and Raqqa will inevitably rebuild and hopefully recover the diversity they once had.

From Thessaloniki to Alexandria [via Izmir, Alexandretta, Tripoli, Beirut, Sidon, Tel Aviv, etc.], Levantine cities share a political history, a geographic position, and customs that are as cosmopolitan as they are diverse. Beirut’s population, for example, has welcomed Syrian refugees as early as the 1860s, Armenians at the turn of the century, people from Adana, Iskenderun and Antioch in the 30s and early 40s, as well as from Haifa, Jaffa, Akka, Jerusalem, Cairo, Alexandria, Aleppo, Damascus, Homs, Mosul, Baghdad, etc., at one stage or another in the last 150 some years. The cultural mobility found in these cities stands at the core of levantine society and it is, in fact, through the examination of that which is neither settled nor stable (i.e., colonization, emigration, exile, contamination, wandering, and economic exchange, coupled with aleatory compulsions like greed or longing) that we can begin to understand how such cosmopolitanism came to be. Recent events have destroyed many of these cities known for their diversity (e.g., Homs, Aleppo, Mosul, Raqqa, etc.) and the way their urban and social fabrics will be rebuilt poses fundamental questions to architecture, urbanism, and the humanities. With the support of the  New Levant Initiative, Labs at Columbia, MIT, Miami, and Rice will serve to imagine cities in a New Levant that are compatible with the disparate, even if conflicting, values of diversity, secular nationalism, multi-confessionalism, pluralism, cohesiveness, equality, and compatriotism. These labs will seek answers to such questions as: What lessons in postwar organization can possibly serve a hopeful future for once vibrant cities destroyed by war? What are these urban ingredients out of which Beirut or Aleppo are made and what are the networks on which they depend? What should we do to preserve both these ingredients and these networks in the hope of seeing them redeployed again? Can we assist a new generation of architects, scholars and scholarly virtual networks, as well as preservation initiativesthat remain irreverently optimistic about the power of a secular, transnational, progressive and intellectual Arab world? How can computational resources and analytical expertise aid in the design and development of more sustainable, livable, and resilient Levantine cities? To what degree might coding become the lingua francaof a New Levant, a place as networked as it once was not that long ago?

“Levant Carta” at Rice will be devoted to mapping the evolution of Levantine citiesas the sites of a memorable past, a difficult present, and hopefully a better future. This will require reconceptualizing and reengineering the Beirut map platform in order to integrate its technology and workflow and so that it can be made available to others who may be interested in building diachronic maps of their own. Facilitating cutting-edge research on the history of Levantine cities is the Levant Carta’s primary goal, and this will subsequently lead to the development of teaching modules so that the Levant Carta platform can be used in classrooms anywhere in the world. Because  departs from standard GIS projects in its emphasis on visual sources that can be used in creative new ways to study both the evolution of a city and the lives of its residents, research questions posed by scholars will necessarily require a degree of spatial literacy and IT competency. Participants in Levant Carta will be able to rely on the assistance of a resident postdoctoral fellow and two full time GIS specialists/developers in order to learn how to work with the platform, share and disseminate the data of their research in the social and urban history of Levantine cities, and thereby foster collaborative research projects in the long term. Each city project will consist of a first phase that involves the development of a data model followed by the actual design of the map and its user-interfaces, all within a Levant Carta environment.A conference, held annually, will bring together scholars who have set up their own diachronic map projects, in addition to others interested in initiating collaborations. In addition, Levant Carta will host a “think tank” of faculty and graduate students from Rice University and University of Houston who are working on the Middle East and who can contribute to and learn from ongoing map projects while imagining others. The proposed Levant Carta project, therefore, will enable many ongoing research projects to reach a phase of public dissemination, allow others, as yet unimagined, to take shape, contribute to information technology infrastructure on campus, provide undergraduate and graduate students with new educational and professional experience, and create research communities dedicated to the study of the Levant.